There has been plenty of captivating fiction that I’ve enjoyed this year, in the crime genre and beyond. Some of my favourites were new releases and others a little older, but here’s a rundown of what gripped me the most, in no particular order…

Police at the Station and They Don’t Look Friendly, by Adrian McKinty 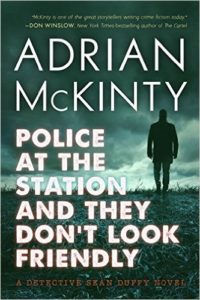 The latest Detective Sean Duffy thriller, this is a real page-turner and one of the best in this deeply atmospheric series set in Belfast during the height of The Troubles. The best thing about the Duffy books is that McKinty’s not afraid to age his main characters and evolve their lives, and there was a very different dynamic to this sixth instalment with Duffy’s baby daughter, Emma, along for the ride.

Black Widow, by Chris Brookmyre
It’s been a while since I’ve read any Chris Brookmyre and this novel sees the return of his famed protagonist, discredited hack Jack Parlabane. This time he’s being asked to investigate the suspected death of a recently married IT guru by the victim’s sister, as domestic noir meets intriguing mystery. There are many twists, some more convincing than others, as the plot unravels but Parlabane’s tenacity and human intelligence gives the story real drive.

Anything is Possible, by Elizabeth Strout
This is a wonderful collection of intertwining stories set in the same Illinois rural town as Strout’s previous novel, My Name is Lucy Barton. Revisiting some of those characters, including the narrator, we’re treated to a fuller understanding of incidents given a passing mention in the previous book and a wider scope of these people’s dramatic, disturbing and sometimes surprising lives. Each story comes across as genuine and poignant, with elegant touches of light humour and dark sorrow timed to perfection.

In Sunlight or in Shadow, edited by Lawrence Block
Now this is something truly original – an anthology of short stories, each inspired by a particular painting of the great Edward Hopper. Contributors include Stephen King, Joyce Carol Oates, Michael Connelly, Megan Abbott, Jeffery Deaver, Lee Child, and Block himself. Each story comes illustrated with a colour reproduction of the painting that instigated it, with authors given freedom to interpret Hopper’s ambiguous and stirring narratives as they see fit – and the results are awesome.

Since We Fell by Dennis Lehane
Lehane, a doyen of urban crime/mob writing, turns his hand to more of a psychological and domestic thriller this time, following the downward spiral – and spirited recovery – of a former TV newswoman, Rachel Childs, who marries someone she goes on to fundamentally distrust. It’s something of a departure from Lehane’s back catalogue but it works, the main character’s complex history adding a rich layer of context and drama to a powerful tale.

Eureka Dunes, by Philip Davison
I’ve been a fan of Philip Davison since his Harry Fielding quartet in the early noughties, and this novel is a moving tale of Magnus Sparling, a high-powered Whitehall civil servant who’s called home to Dublin after his father, Edwin, is accused of attempting to poison his wife. The narrative flits between the present day and Magnus’ childhood, including an eloquent depiction of a road trip taken by Edwin and a 14-year-old Magnus through the deserts of California, as the bonds of family life are delicately exposed and tested.

Race to the bottom, by Chris Rhatigan
Rhatigan has a real gift for portraying troubled characters whose choices go on to make their lives spectacularly worse. In this sharp and humorous read, Roy – a borderline alcoholic trapped in a menial job – is dragged into the middle of a murder investigation after a night out with his drug-dealing friend Banksy goes awry. Rhatigan’s visceral prose and rapid plotting makes for one hell of an entertaining read.

All the Old Knives, by Olen Steinhauer
I’d been meaning to get around to this one since its release in 2015, and I’m glad I finally did as it’s another triumph from a talented spy novelist who does a magnificent job of bringing out the human details of espionage. CIA case officer Henry Pelham pays a visit to former colleague and lover, Celia Harrison, who’s since quit to lead a quiet family life in California, in an effort to discover more about a terrorist-hostage crisis in Vienna that ended disastrously six years ago. The tension as they relive the past over dinner in a fancy restaurant is exquisite, and the twist ending sublime.

Green Hell, by Ken Bruen
The 11th in the Jack Taylor series, Bruen’s bitter, alcohol-fuelled PI is back for more, this time taking on a respected but violent professor of literature at the University of Galway. He gets a little help from Emerald, an edgy young goth woman who makes an extravagant appearance. No one writes with such wickedly poetic prose as Bruen, a unique master of the crime fiction trade.

The Highway Kind, edited by Patrick Millikin
We finish off with a thrilling batch of short stories based around cars, driving and the open road – a vibrant, and not to mention uncomfortable, study of American life through its national obsession of the automobile. Contributors such as C.J. Box, George Pelecanos, Diana Gabaldon, James Sallis, Sara Gran, Willy Vlautin and Joe Lansdale give us tales of a car salesman facing the wrath of a psychotic customer, desperate con men, lost youths, wild Apache youth, astonishing road rage and a Mexican drug lord who drives a modified VW bus.