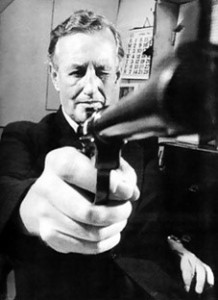 Few novelists have mastered the pulsating art of thriller writing better than Ian Fleming, born on this day in 1908, but for my money he never received the critical acclaim he deserved.

Not only did he maximise a natural flair for storytelling, Fleming wrote with a finely-tuned grasp of creative prose that was by no means appreciated prior to his death in 1964, and was in fact often ridiculed by the high-brow literary elite of the day, which even included his close friends and his wife, Ann Charteris.

So, in a brief tribute to the creator of James Bond, here are five works where I feel Fleming best encapsulated his vivid mastery of espionage, betrayal and adventure, as well as his deep understanding of the human disposition.

1. Casino Royale
Fleming famously said of his work “while thrillers may not be literature with a capital L, it is possible to write what I can best describe as ‘thrillers designed to be read as literature’.”

Unfortunately not everyone agreed, and the release of Casino Royale, Fleming’s 1953 debut novel and the moment British secret service agent James Bond strode imperiously into the world, was met with mixed reviews.

Set in the opulent fictional casino town of Royale-les-Eaux in northern France, Bond takes on charismatic gambler and Russian agent Le Chiffre with the help of Vesper Lynd, one of the most conflicted female characters Fleming ever crafted, the CIA’s Felix Leiter and French intelligence operative Rene Mathis.

Skilfully utilising his wartime experiences as a prominent member of the Naval Intelligence Division, Fleming blended a breathtaking plot and sharp writing style with an authoritative voice on the sinister, fascinating life of a spy.

Dealing with themes of deception, fear and not to mention torture (one standout scene in particular), Casino Royale also casts an astute light on Britain’s position in the world at that delicate time, particularly its tense relationships with the USA and Russia in those formative Cold War years.

It’s a slick, gripping read that I’d heartily recommend to anyone yet to read Fleming’s work. Alan Ross in The Times called it “an extremely engaging affair” while The Sunday Times likened it to the style of Eric Ambler and Time magazine to that of Raymond Chandler.

The Manchester Guardian called it “a first-rate thriller” but also labelled it “schoolboy stuff” while The Listener dismissed the champagne-guzzling, wise-cracking Bond as an “infantile” creation. Not for the first time, Fleming’s intense and emotive output was unfairly looked down upon by some as populist fodder.

The Soviet counterintelligence agency SMERSH plans to assassinate Bond in a way that humiliates the British Secret Service. No fools, they send a beautiful cipher clerk in as bait to draw Bond in.

Fleming’s decision to place much of the action in Istanbul and on the Orient Express gives the book an exotic edge, while further background to Bond’s private life, including his surprising levels of self-doubt, is subtly added to enhance character development.

The taut plot also includes a cliffhanger finale, with Rosa Klebb, SMERSH head of operations, kicking Bond with a poisoned blade hidden in her shoe, causing him to lose consciousness and collapse to the floor clinging for life as the book ends.

Once again there was an air of snobbery in the reviews, Anthony Boucher describing the book as having “a veneer of literacy” but US president John F Kennedy later listed From Russia With Love as one of his favourite books, not only leading to a surge in sales, but also cementing Fleming as a major author of note Stateside.

3. The Spy Who Loved Me
This 1962 novel was a huge creative gamble by Fleming, and one that he wasn’t given enough credit for. Courageously abandoning Bond for much of the book, The Spy Who Loved Me is told by a female narrator, with Bond making a late appearance in a supporting role. Needless to say, the 1977 film version starring Roger Moore contains no elements of the book whatsoever.

The gamble was even larger considering the fact that the public’s appetite for reading about a male super hero spy, and Bond in particular, had never been higher, and the Bond franchise was about to reach astronomical levels with the release of the debut film, Dr No, that summer.

But, with his health deteriorating, Fleming decided to go for broke and lead with the voice of a female stranger, perhaps with half a mind on securing that elusive intellectual acclaim.

The story centres around Canadian Vivienne Michel who, after being educated in England, returns to North America in her early 20s and embarks on a leisurely road trip. In the Adirondack Mountains in the north of Upstate New York, she spends a stormy night looking after an empty hotel shortly to close for the winter. Two thugs arrive, and are in the midst of attacking her when Bond appears, having suffered a puncture on route from Nassau to Toronto, to save the day.

The depth of characterisation Fleming achieved with his new lead protagonist was one of his finest literary successes, and he even went as far as giving Vivienne a fictional co-author credit in the prologue.

But the brave departure from standard Bond formula jarred many fans and reviewers, and Fleming’s confidence took such a knock from the book’s poor initial reception that he attempted to block all reprints as well as a paperback edition in the UK, although such a version was published after his death. Over the years public opinion surrounding this work has become decidedly warmer.

4. On Her Majesty’s Secret Service
By far the most interesting of the ‘Blofeld trilogy’, sandwiched between Thunderball and You Only Live Twice, this unique 1963 novel stands out for Fleming’s deeper unravelling of Bond’s persona.

After tracking Blofeld down to his mountain-top clinical research institute in Switzerland, Bond attempts to destroy both the centre and the resourceful villain. But the charm of this book lies in what is revealed about Bond. We read about him visiting the grave of Vesper Lynd, who had such an effect on him in Casino Royale, and he later meets and falls in love with Contessa Teresa ‘Tracy’ di Vicenzo, the daughter of a powerful crime boss.

An emotional Bond asks Tracy to marry him and so, for the only time in the Bond canon, the heroic spy ties the knot. While driving away from the ceremony, Blofeld shoots at the car from distance, killing Tracy. Bond escapes injury but is mentally scarred forever.

5. Octopussy
I’m going to finish off with a short story – Fleming wrote nine of them in the Bond series, and because I’ve already covered the best of these, The Living Daylights, in another piece on this site (7 of the most underrated short stories ever) for the sake of variety I’ll discuss the next best here – Octopussy.

Turning up at Smythe’s lavish Caribbean home, Bond, like us, is told the story in flashback as Smythe, sensing his time is up, tantalisingly unravels his involvement in the case. Fleming does a wonderful job of portraying a man of high standing unburdening himself, the years of guilt slipping away, and then strikes a fine and perfectly plausible connection between Bond and the murder victim, clarifying for the reader why MI6’s finest has been sent to make this arrest.

Smythe, knowing his comeuppance is due and that Bond won’t be shaken off, commits suicide by allowing his pet octopus to attack him in his own swimming pool, bringing on a fatal heart attack.

An absorbing read that carries a peculiar edge, Octopussy is a fine example of a major character dominating a short story even with a minor role – Bond’s mere presence forces Smythe’s hand.