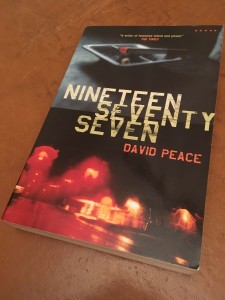 Writing a follow-up to a big hit can be a huge challenge and one that few authors really pull off.

But here are 10 fine examples where the sequel does full justice – or even enhances – a fantastic crime novel that caught the imagination. Huge success stories in their own right, you could say…

Nineteen Seventy-Seven
David Peace’s evocative debut novel, Nineteen Seventy-Four, made a big impact on the British literary crime scene and his follow-up, Nineteen Seventy-Seven, gave us more of his vivid depictions of a corrupt Yorkshire police force and bleak, northern communities terrified and bewildered by the Yorkshire Ripper murders. This sequel was a standout slice of what turned out to be a four-part series labelled The Red Riding Quartet, featuring several recurring and connecting characters, the flaws and fights of all them beautifully described in relentless, unyielding fashion.

The Big Nowhere
If The Black Dahlia turned James Ellroy into one of the hottest crime writers around in 1987, his sequel to it a year later, The Big Nowhere, elevated his status to one of the most powerful literary voices in crime fiction history. An engrossing tale of disgraced detectives, alcoholic anti-heroes, Hollywood Communists and a brutal sex murderer set against the backdrop of a post-war Los Angeles smeared with greed, deception and paranoia, this is a disturbing masterpiece.

Driven
I describe James Sallis’ scintillating short novel Drive elsewhere on this site as ‘a work dripping with existential minimalism, taut plotting, brutal hostility and sharp-witted dialogue’ and the book’s main character, the ‘Driver’, a Hollywood stunt driver by day and a wily getaway wheelman for the LA criminal underworld by night, returns in Driven. This is a classic sequel that, set seven years later, digs deeper into the instinctive make-up of this cryptic hero while taking the reader on a glorious ride. Modern noir at its finest.

The Dead Yard
Adrian McKinty’s stunning novel Dead I Well May Be introduced us to Belfast-born Michael Forsythe, an ambitious and resourceful lackey for a New York mob who, after being double-crossed big time, grows up fast into a cool and cunning killer. Five years later in The Dead Yard Forsythe is infiltrating an IRA sleeper cell in New England, living by his wits, falling in love and killing time and time again in order to stay alive. Few thrillers, if any, are written with such convincing action sequences as this rip-roaring read.

Ripley Under Ground
Patricia Highsmith’s wonderful follow-up to The Talented Mr Ripley is a fantastic psychological thriller and also a fine example of re-visiting a defining character in a very different setting to how they were introduced. The days of posing as Dickie Greenleaf behind him, Ripley is now living with a stylish – and of course wealthy – wife in rural France and running an art forgery scam, but after being exposed faces an enthralling battle to maintain his lavish Continental lifestyle and his freedom.

Farewell, My Lovely
Raymond Chandler brings back LA private eye Philip Marlowe in this 1940 sequel to The Big Sleep. This glorious book oozes style with an array of dazzling dialogue as Marlowe gets dragged into a murder that leads to a gang of jewel thieves, city corruption and a whole lot more murders. No wonder it was adapted for the screen three times.

Live and Let Die
This second James Bond book is a classic that builds on the momentum of Ian Fleming’s debut hit, Casino Royale. A lightning quick plot taking in striking locations such as Harlem, Florida and Jamaica together with some sharp characterisation allows readers to get deeper under the skin of this fascinating secret agent. The tone of this book, released in 1954, is heavier than the first as Fleming does a terrific job of placing Bond at the heart of these formative Cold War years, as well as in the middle of tense Anglo-American relations.

McKenzie’s Friend
Irish writer Philip Davison introduced reclusive MI5 understrapper Harry Fielding in The Crooked Man in 1998, and three years later brought him back in McKenzie’s Friend, a delightful novel exploring Harry’s complex relationship with his arrogant employers, his dementia-stricken father and his old mate Alfie, a bent cop who’s about to drag Harry deep into the mire.

Live by Night
Dennis Lehane’s epic follow-on to The Given Day, this is heavyweight crime fiction at its hard-hitting best. Joe Coughlin turns from small-time thief to big-time outlaw in 1920s Boston in this sprawling journey of violence, betrayal, love and pain. One of those rare examples of a long book that’s quick to read.

Donkey Punch
Cal Innes, our damaged hero from Saturday’s Child, has left his PI business behind to take on a caretaker’s job at a Manchester boxing club in this cross-Atlantic classic by Ray Banks. Shepherding/babysitting promising amateur pugilist Liam to a tournament in Los Angeles, Innes gets more than he bargained for when he discovers the competition is fixed by the kind of sinister underworld types he thought he’d left behind in the gritty north.

Honourable mentions must also go to the following sequels – some outside of my treasured crime fiction genre – that nearly broke into the top 10 (and funnily enough make a top 20):

Closing Time, Joseph Heller’s follow-up to Catch 22
The Crossing, Cormac McCarthy’s sequel to All the Pretty Horses
Imperial Bedrooms, the follow-up to American Psycho by Bret Easton Ellis
The Killing of the Tinkers, Ken Bruen’s sequel to The Guards
The Growing Pains of Adrian Mole, Sue Townsend’s follow-up to the best-selling The Secret Diary of Adrian Mole
The Sicilian, regarded as Mario Puzo’s literary sequel to The Godfather
Porno, Irvine Welsh brings Renton and Co back 10 years after Trainspotting
Go Set a Watchman, Harper Lee’s sequel – or earlier draft, depending on your take – of To Kill a Mockingbird
The Lost World, Michael Crichton’s follow-up to Jurassic Park
Bring up the Bodies, Hilary Mantel’s sequel to Wolf Hall.