It’s been another year of cracking reads and scintillating crime fiction, so I thought I’d share my favourite books – some new, some not so new – that I’ve read during 2015. In no particular order and all that… 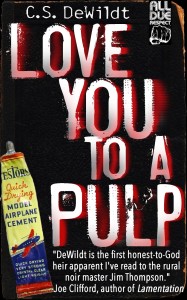 Love you to a Pulp, by C.S. DeWildt
This for me was one of the hits of the year – a bold, quick-fire slice of American rural noir that never stops for breath. Neil Chambers, a glue-sniffing, hard-hitting private detective scythes and stumbles his way through the Kentucky countryside trying to solve the murder of Hoon, the boyfriend of a client’s daughter. Competing with an assortment of scammers and thugs – not least his former colleagues at the local police station – to get to the truth, Chambers drags himself through the depths of despair on a colossal journey. Interspersed with some graphic flashbacks to Chambers’ cruel and violent upbringing, Love you to a Pulp is a haunting and chaotic classic that has drawn fair comparisons with noir master Jim Thompson.

Hidden, by Emma Kavanagh
A stirring psychological thriller, this book is a triumph thanks to the author’s choice of format in unravelling a compelling story. A gunman goes on a shooting spree in a hospital canteen. We then rewind a week and experience the build-up to this tragedy not just inside the head of the killer but also from a journalist, a psychologist and a firearms officer. Multi-viewpoint fiction doesn’t always maximise the drama of a narrative, but in this case Kavanagh pulls it off in style.

The Axeman’s Jazz, by Ray Celestin
Based on the true story of a serial killer who terrorised New Orleans in 1919, this atmospheric novel is a fine example of a specific time and place being explored in such intricate detail that the setting becomes a vivid and absorbing character itself. This charismatic city is harnessing the art of jazz music against the backdrop of WW1-returning soldiers, frayed race relations on the vibrant streets and the rise of the mafia. We follow three very different detectives all vying to unmask a violent killer who strikes at random, gleefully slicing apart innocent families. Who’s going to crack the case becomes more interesting than who the murderer is in this ambitious, evocative debut. And there’s even a place for a young Louis Armstrong.

Matador, by Ray Banks
Ex-bullfighter Raf survives life-threatening injuries to come back and take on an ageing British gang of mobsters who thought they’d finished him off in the Costa del Sol. I love Ray Banks; he writes gritty crime with such authority and strikes at the heart of what’s really personal about each of his characters, making their actions always seem truly believable because they’re utterly in line with their gut fears and aspirations. He nails the Spanish setting (a far cry from his traditional northern England locations), the Tarantino-esque quest for revenge and the cat-and-mouse thrills, while the massacre at the end is just glorious.

The Deepening Shade, by Jake Hinkson
A wonderful collection of thought-provoking short stories, Hinkson explores not just the dark side of humanity here but also the resilient one. His range of damaged, hardy and farcical characters include a heartbroken alcoholic cop trying to prevent Dick Cheney-masked gunman robbing a petrol station, a lesbian couple running a homeless shelter aiming to save a tragic young woman controlled by a self-proclaimed prophet, and a stripper prepared to kill a man in order to protect her sister from going to jail. Hinkson isn’t afraid to tap into heavyweight themes, religious fundamentalism being a recurring one, but he skilfully manages to give his stories a moral punch without laying the righteousness on thick.

The Drop, by Dennis Lehane
Regular readers of this site will know I’m a big fan of Lehane, and here he returns to his native streets of Boston to give us the taut tale of unassuming barman Bob Saginowski, who finds himself at the heart of a robbery gone awry at the Chechen mob-run bar where he works. The Drop is also a touching love story, and no one does unspoken emotion better than Lehane, who adapted this book from a screenplay he wrote for the film of the same name, which became famous for being James Gandolfini’s final movie.

Munich Airport, by Greg Baxter
I adored Baxter’s previous novel, The Apartment, and was delighted to see the same reflective, lyrical prose produced in this book, the story of the impact a young woman’s suicide through anorexia has on her brother (the unnamed narrator) and father. The two, now off food themselves, are stranded at Munich Airport waiting for bad weather to clear in order to fly her body home to the States. The young woman, Miriam, had been living estranged from them in Germany and the story backtracks over the last few days as the two of them search for reasons why Miriam’s life deteriorated as well as their own memories of her childhood. Gloomy, intense, but most of all rich in character, this is a beautiful work.

Two Bullets Solve Everything, by Ryan Sayles and Chris Rhatigan
A nice little collection of two briskly-paced novellas here; one good, the other outstanding. In Disco Rumble Fish, Ryan Sayles guides us through a SWAT team’s dramatic operation to home in on a criminal who aided a mobster’s violent jailbreak, in which an officer was killed. In Chris Rhatigan’s A Pack of Lies, corrupt local newspaper reporter Lionel Kasper gets in way too deep after being forced into a badly-hashed murder in order to protect his crooked methods. Kasper is a resourceful but sly loser of the highest order, and the powerful voice that Rhatigan gives him works a treat.

The Rainbird Pattern, by Victor Canning
Winner of the Crime Writers’ Association Silver Dagger in 1972, I read this charming and intriguing caper for the first time this year and loved it. Wealthy old spinster Miss Rainbird offers her spiritual medium Blanche Tyler a wad of cash to locate her long-lost illegitimate nephew, Edward Shoebridge. Blanche and her boyfriend George Lumley take the job on, only to find Shoebridge is making a ton of money for himself by kidnapping high-profile people across southern England and collecting tidy ransoms for their safe return, and he’s in no mood to be discovered by two chancers. The story was later adapted for the screen as Alfred Hitchcock’s final film, Family Plot.

11:22:63, by Stephen King
Time travel isn’t really something that has gripped me before within the realms of literature, but this book is a striking exception. King is a genius, of course, but in this tale his writing scaled heights I’ve never witnessed from him before as he lifts this story vividly to life. As ever, it’s all in the tiny details, and his creation of a time portal in the pantry of a diner that sends people back to 1958 is a wonderfully persuasive piece of imagination. Bored school teacher Jake Epping sets himself the task of travelling back in time to prevent Lee Harvey Oswald from assassinating JFK in Dallas in ’63, which is a heck of a plot to draw anyone in. The only downside is, like much of King’s work, it’s too long and he could have cut 200 pages out of this dense tome and not lost a jot of drama.