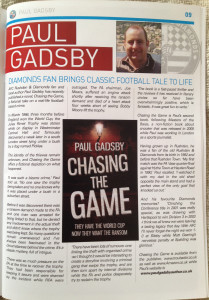 I’ve written an article published in The Guardian about the true-life crime that sparked the narrative behind my new novel Chasing the Game.

The colourful, in-depth feature describes the theft of the Jules Rimet (World Cup) trophy in London in 1966, as well as dramatic events in Rio in 1983 when the trophy was stolen once again, never to be recovered.

The full article in The Guardian, titled ‘World Cup mystery: what happened to the original Jules Rimet trophy’ can be found by clicking here.

Another feature I wrote about the 1966 theft was published in the London Metro newspaper – ‘Holding the 1966 World Cup to ransom: The curious theft of the Jules Rimet trophy’ can be found here.

To read more about Chasing the Game and the real-life crime that influenced its narrative, please click here.

The book has already received several rave reviews in the media, including from Britain’s biggest crime website Crime Fiction Lover and the highly revered Crime Time. To read a summary of those and more glowing reviews for Chasing the Game, please click here.

One of Britain’s biggest crime fiction websites, Crime Fiction Lover, has followed in the footsteps of other leading media sources by awarding my debut novel Chasing the Game with an excellent review.

Led by a team of expert contributors and critics within the genre, Crime Fiction Lover is one of the most firmly established and well-respected websites around, covering news, reviews and features across a wide range of crime from atmospheric noir and thriller mysteries to hardboiled detectives and police procedurals.

Reviewer David Prestidge read Chasing the Game, my fictional depiction of the real-life theft of the World Cup trophy in London in 1966, and the full review can be found here.

Amongst his comments, David wrote that the story provides ‘a mixture of criminal incompetence, jealousy and black comedy, which presents itself as a plausible account of one of Britain’s greatest unsolved mysteries.’

He added: ‘This is a London where the smart boys smoke Dunhills because the slimline pack doesn’t spoil the cut of their suit jackets, a Mark II Ford Cortina could just about take a man’s breath away, and Michael Caine was doing something similar to young women with his screen portrayal of the amoral Alfie.

‘I thoroughly enjoyed this book. The prose is unpretentious, brisk, and will move the reader through the 200-odd pages with minimal effort. Gadsby has taken a real-life event that remains a mystery to this day, and provided a perfectly plausible, well-timed and entertaining fictional account.’

This write-up of Chasing the Game comes after further glowing reviews greeted the book’s release, not least from the highly-revered Crime Time website as well as critically acclaimed author Guy Portman and blogger ‘Book Addict Shaun’.

So far on Amazon, the book has attracted eight reviews; seven of them 5 star and one 4 star.

To read more about Chasing the Game and the true crime that influenced its narrative, please click here.

My debut novel Chasing the Game has received a glowing review from – among others – the highly-revered Crime Time website.

Just days after its release, the book was reviewed by Crime Time contributor Brian Greene and the full review can be read by clicking here.

Amongst his comments, Brian wrote: ‘There’s much to like about this, Gadsby’s first novel. The characters are believable, the storyline is compelling, and Gadsby excels at balancing the various subplots.

‘As you read along you’re just as intrigued to find out what will become of Blake’s personal life as you are to see what will go down with the firm and with the consequences of the trophy heist. The author never makes the mistake (too often seen in recently-written edgy crime novels) of toiling at making his characters come off as hard – he just shows them as they are and places them in interesting situations, and that’s enough to make you care.’

Crime Time previously ran as a popular magazine, running for 54 issues before reverting to a pure online source of crime news, features and reviews in 2008. Edited by Barry Forshaw, widely regarded as the UK’s leading expert on crime fiction having written many books on the subject, Crime Time is hugely popular and known for reviewing the best crime fiction in the UK and around the world.

Esteemed novelist James Sallis once said about Crime Time: ‘This is what the rest of the magazines want to be when they grow up.’

This review comes hot on the heels of the book’s hugely positive review by critically acclaimed author Guy Portman, which can be read in full here.

Amongst Guy’s comments, he wrote: ‘The story skilfully merges fiction and the real life events surrounding the actual theft of the Jules Rimet Trophy in 1966. This is a fast paced mystery with an atmospheric setting that succeeds in depositing the reader into the vibrant, rapidly changing London of the 1960s.

‘The reader is able to identify with protagonist, Dale, despite his criminality, due to his sympathetic nature and a problematic personal life that entails a declining relationship with wife Sheryl, a runaway teenage son, and a father in prison.

‘Chasing The Game is compelling, original and eminently readable, with an unpredictable plot. The book will appeal to all mystery and crime aficionados.’

Chasing the Game was also highly praised on the ‘Book Addict Shaun’ blog, which can be read in full here.

Amongst Shaun’s comments, he wrote: ‘The setting of 1960s London was felt throughout the book. The city was definitely brought to life here. And the book had a strong cast of believable characters. Yes it’s a book partly about football but you don’t need to be a massive football fan to enjoy the book. It’s also about friendships, relationships and internal conflicts within a firm and we all know how the real life ones usually turn out so the fictionalised one here was very enjoyable.

‘The writing in the book is incredibly strong too. It was also a very gripping read which once your start you won’t want to put it down. I’ve already had my dad asking me if I’ve read it yet as he wants to read it too. Overall a very enjoyable book, definitely something a bit different to what’s out there at the minute and a book I highly recommend. Will definitely be keeping an eye out for more from this author.’

I have been invited to speak about my new novel Chasing the Game at this summer’s Festival of Football Ideas (FOFI) in Bristol.

The two-week event, held on the eve of the 2014 World Cup, is a celebration of how literature, art, film, music and comedy can connect with football.

The Festival will run each night from Friday 30 May – Saturday 14 June and will feature talks and performances from artists, writers, poets, academics, musicians and comedians. Full details of all the exciting events are available at the Festival’s website here.

My talk, at 7pm on Saturday 31 May, is within a section called ‘Altering the narrative’ and is titled ‘Chasing the Game – A Creative Twist on the Theft of the Jules Rimet Trophy’.

Each evening will consist of two talks, split into two ‘halves’ of 45 minutes, with a half-time break – oranges are optional. Tickets for most events will be £5 and can be booked through the website from 25 April.

The Festival is a not-for-profit event created and run by a group of friends and volunteers for the love of football and art.

It will be held at The Planetarium based at the At-Bristol site. The event also has its own Twitter page, @Bristol_FOFI

My new crime thriller Chasing the Game – a groundbreaking fictional take on the real-life theft of the World Cup trophy in 1966 – has just been released.

The solid gold Jules Rimet Trophy was stolen from Westminster Central Hall three months before the tournament and famously discovered by a dog named Pickles in a London street a week later, wrapped in newspaper. But the circumstances behind the crime, and its perpetrators, remain unsolved to this day.

Chasing the Game brings this intriguing tale to life, weaving a set of vivid characters into the tale to create a gripping – and shocking – version of a story that still draws much speculation today.

For more details on the background behind the 1966 theft of the Jules Rimet Trophy and the plot of Chasing the Game, please click here.

The book enjoys a timely release in the build-up to this summer’s World Cup in Brazil, a country where the Jules Rimet Trophy was actually stolen again in 1983, and this time never recovered.

You can order Chasing the Game from the book’s publishers Matador as well as several leading retailers including Amazon, iconic independent bookseller Foyles and Waterstones.

The book is available as a paperback as well as an ebook in all major formats.

More updates about the book will be posted on this website and on my Twitter page, @PaulJGadsby