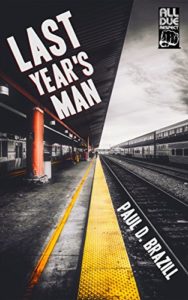 Aside from the day job and promoting my noir thriller Back Door to Hell in recent months, I’ve still been finding time – as always – to read some riveting books.

So to give you a flavour of what I’d recommend at the cutting edge of contemporary crime fiction, below are some reviews I’ve posted for some of my favourite reads of 2019 so far…

Last Year’s Man, by Paul D. Brazill
I’ve always been fascinated by the ageing gangster/hitman theme and this slick and stylish noir thriller from Paul D. Brazill is a barnstorming success.

Tommy Bennett, feeling heat from the London law after a botched job, returns to his native north east (a nice nod to Get Carter) to lay low and regroup. But reconnecting with old underground acquaintances and family members is no easy thing, nor is dealing with a weakening bladder and increasing medication routines, and Tommy needs to show all his grit and resourcefulness to steer clear of dangerous old ghosts haunting him.

Structured within an easily digestible novella length, this is a breezy tale filled with Brazill’s familiar sharp, clipped dialogue. There are plenty of laugh-out-loud one-liners, while the cultural references are relevant and the violence is vivid. The free-flowing narrative makes this a really enjoyable read and a standout addition to this author’s extremely credible back catalogue.

Dread: The Art of Serial Killing, by Mark Ramsden
This smart, sharply observed thriller is a thoroughly entertaining and rewarding read.

Few main protagonists are as entrancing and depraved as the Dickens-obsessed Madden, a spy and a serial killer who’s spinning more than a few plates as he infiltrates a right-wing nationalist group.

Aside from the charismatic and twisted hero/anti-hero, the prose style is a real highlight to this book. Shifting in tone from despair to graphic with a slick rhythm and a healthy dose of perfectly pitched dark humour throughout, the author is effortlessly in control of where he’s steering you.

The tempo and style reminded me of the brutal yet eloquent noir of Matthew Stokoe in places. This is a read that you won’t forget in a hurry – highly recommended.

Townies: And Other Stories of Southern Mischief, by Eryk Pruitt
I love short story collections and I’ve come across some of Eryk Pruitt’s writing in a few crime anthologies, but this was my first experience of a whole book of his work.

His range is impressive – in terms of subject matter, characters and setting – and there’s something here for every fiction fan, from a humorous take on a vengeful tale about profiting via fantasy football to a cruel battle over a lawn mowing route.

The dialogue in every story is convincing and the themes explored – whether it’s violence, the threat of violence, desperation or redemption – are delivered with care an aplomb. Lots of showing not telling, lots of brutality and second guessing, this author has a lot of control over his writing and the stories had me entertained and, in some cases, spellbound.

Dead is Beautiful, by Jo Perry
The Charlie and Rose series has captured the hearts and imagination of many readers, and with this latest instalment it’s easy to see why.

Charlie and his ghostly canine companion Rose, both dead and existing in a surreal afterlife, return to LA in this new mystery crammed with hardened prose, dry humour, and of course dark, dark noir.

A mature tree is felled illegally, throwing the two protagonists into an investigation that leads to a murder and into the path of Charlie’s brother, who’s in danger and needs help. Charlie, who never got on with his sibling, is trapped in a state of melancholy for much of this tale and needs the good-natured and perceptive Rose by his side more than ever if he’s going to power through.

Exploring the city’s homelessness as well as its luxury mansions, this book has great range of setting and character. The profound tone of the story is complemented by the brusque writing style and existential backdrop, all played out with a shrewd, ironic edge.

Fahrenheit Press deserve great praise for putting their faith in this brave and accomplished series. ‘The coolest collection of hardboiled and experimental crime fiction on the planet’ is the blurb of imprint Fahrenheit 13 – on this evidence, that claim is being fulfilled in spades.

Death of an Angel, by Derek Farrell
Danny Bird’s fourth adventure, this book is woven with a delightfully smooth and engaging writing style that really hooks you in from the start.

The stakes are high for the main protagonist, a bar manager/amateur sleuth, as he attempts to solve a multi-layered mystery that is intricately plotted and laced with polished humour. Danny’s exploits see him exposed to a wide range of characters and settings, up against high-powered corruption as well as domestic and personal strife.

The prose has a gorgeous, warm flow to it that particularly appealed to me, while the story is skilfully structured as it builds to a fitting crescendo.

Like all good series books, Death of an Angel also works as a standalone, with the various twists and turns – all driven from, or towards, the heart of the main character – unravelled with masterful elegance.

Broken Dreams, by Nick Quantrill
Down-at-heel PI Joe Geraghty, scraping a living in the northern, isolated city of Hull, is hired by a local businessman to investigate a staff member’s unexplained absenteeism. The case soon leads Geraghty into the heart of a murder investigation that carries links to Frank Salford, a key businessman central to the city’s regeneration scheme who is also a ruthless gangland boss.

The pace of this book is strong from the start and the drama heightens nicely as the story unfolds and the stakes rise. Geraghty is a very well-drawn character, the naturalness of his mannerisms, behaviour, outlook and dialogue really flesh out the believability factor in him. So many authors try to make their characters appear real by homing in on their ‘normal’ qualities to make them likeable and it can feel too contrived, but everything about Geraghty – the good and the bad – comes across as authentic in an effortless way.

But there’s another major character that deserves a mention here – Hull itself. Reading the book from the perspective of someone who has never been there but has felt enriched by visiting many northern cities, including living in one for four years, I felt this was a real bonus in Broken Dreams. Getting to know the many parts of Hull, from its past as a fishing fortress to its modern-day cultural renaissance, and feeling its gritty core and warm soul contributes significantly to the success of this urban tour-de-force.