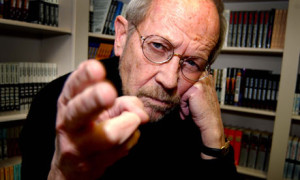 This week marks the 90th anniversary of the birth of Elmore Leonard – a phenomenal writer who surpassed them all when it came to mastering dialogue.

One of the most important aspects of fiction writing, dialogue is an area that often sorts the wheat from the chaff in authors.

Many can excel in areas of plotting, character development or harnessing elegant prose, but all too often it’s the dialogue that trips them up, that takes that crucial edge away from their otherwise carefully drawn characters.

But not for Leonard. Never. The guy always seemed to know exactly where to drop what words in to each line of dialogue for maximum effect. He played with speech in technical ways that no one else could, using comma splices, stark tension shifts, mangles of half-truths and cross-purposes that enriched his characters and brought their voices – together with their fears and dreams – to life.

For many writers, their dialogue ends up – at best – backing up their character creations, enforcing what they predominantly express through their prose. But Leonard used speech in itself as a sheer driving force to hook readers in, to move a story forward, to build suspense, to spring a surprise or to fashion a knockout ending.

He started out publishing westerns in the 1950s, not because he desperately wanted to write them but because he saw it as an under-crowded genre where he could carve out a reputation for himself and build a platform for his career. Thankfully his confidence – and growing talent – led him to concentrate on the natural flows and spurs of his writing rather than any commercial considerations and he turned his hand to crime writing.

1974’s 52 Pick Up was an early classic along with Unknown Man No. 89 (1977) and City Primeval, published in 1980. Leonard’s major breakthrough came five years later with the sublime Glitz, and he went through a period in the late 80s/early 90s when he was simply untouchable. Adored by his readers and revered by his peers, he sold millions of his books while earning constant respect from the literary elite, his standout hits being Freaky Deaky (1988), Get Shorty (1990) and 1992’s Rum Punch, later adapted into the Tarantino gem Jackie Brown.

Many of those crime novels were set in Detroit, where he spent the prime years of his life, and he later earned the nickname ‘The Dickens of Detroit’ for his accurate and intimate portrayals of people from that vibrant city.

One of the most popular and prolific writers of all time, Leonard had chalked up 45 novels along with dozens of screenplays and short stories before his death in 2013.

He could do gritty, funny, plucky and nasty in roughly equal measure, and he offered a glimpse into his creative insight when publishing his ‘10 Rules of Writing’ which included the delightful nuggets ‘Never use the word suddenly’ and ‘Try to leave out the part that readers tend to skip’.

Nice one, Elmore. We miss you.