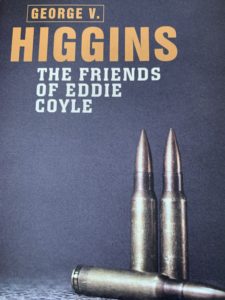 This week marks the 80th anniversary of the birth – and 20 years since the death – of novelist George V. Higgins.

It’s fair to say that he accomplished a fair bit in his life, becoming a respected lawyer, college professor, journalist, and author of 29 books. But I’d like to talk about an early marker he laid down which I think remains his finest work, and certainly my favourite – his 1970 debut novel The Friends of Eddie Coyle.

The tale gets off to a typically cynical, uncompromising start: ‘Jackie Brown at twenty-six, with no expression on his face, said that he could get some guns. “I can get your pieces probably by tomorrow night”.’

What follows is a well-founded chronicle of desperate urban lowlifes all out to get their own – from cold-blooded thieves and black market sellers to lying cops and dodgy politicians. The title character, a small-time criminal turned informant, is hustling hard to set up a gun purchase deal as a middle man so he can give the cops a buyer’s name that may reduce serious jail time coming his way after being caught trucking stolen booze. The story unfolds amongst shabby streets, seedy bars and sullen diners – there’s no Godfather glamour here.

The book’s lucid and atmospheric depiction of the city of Boston received widespread acclaim, to the extent that it was credited with establishing the powerful ‘Boston noir’ subgenre of crime fiction that influenced the style of heavyweight writers like Dennis Lehane and Robert B. Parker, as well iconic films such as The Departed and The Town.

When piecing The Friends of Eddie Coyle together, Higgins already had an impressive knowledge base to draw inspiration and detail from. The Massachusetts native had a law degree from Boston College under his belt, was working as an assistant attorney within anti-organised-crime units, and had written for publications including the Boston Globe, the Wall Street Journal and the Associated Press (for whom he covered a lot of mafia trials) as a reporter and columnist. Oh, and The Friends of Eddie Coyle was his 15th completed novel, the others never getting into print and he ended up destroying them.

His grip on the day-to-day realities of law and order, as well as the principles of crime writing, was therefore already tight, as was his ability to weave convincing characterisation around his plotting.

Higgins, like another favourite author of mine, Elmore Leonard, was a purist when it came to stylising his dialogue. He had a gift for evoking accurate, hardened street-talk and editing it into a stringently compressed form. This method sharpened the tension in a way that often implied the action to come (or that had been) rather than stating it, creating true voices rather than mere words. He loved using dialogue so much that he ended up exploring story and character through it. Here’s another snippet:

“You gotta do something,” Coyle said. “I want you to do something for me, all right?”
“First I want to hear what it is,” Foley said. “Then I want to know why. You got this problem remembering what’s in the deal and what isn’t, I seem to recall.”
“Look,” Coyle said, “never mind that shit. I want you to call New Hampshire and ask him, would it be enough if I was to give you the guys that’re robbing the banks there?”
“What guys,” Foley said, “what banks?”
“You know what guys and you know what banks. I’m not saying I’m gonna do it, now, you understand. I just wanta know, would that do it if I did?”
“Suppose it will. Are you gonna do it?”
“I dunno,” Coyle said.

Critics and readers latched on to Higgins’ beautifully crafted prose and the panoramic scope in which he framed Eddie’s story (spoiler alter: turns out he didn’t have any friends) as well as the inner workings of law enforcement and the Irish-American underworld within the Boston milieu. The book became a bestseller and was adapted into a cool film starring Robert Mitchum.

After the success of his debut release, Higgins went on to have many novels published, but continued with the day job. He entered private law practice in 1973 and later became a professor at Boston College and Boston University. He died of a heart attack seven days before his 60th birthday, on 6 November 1999, at his home in Milton, Massachusetts.

Despite his prolific fictional output and its undoubted quality, Higgins’ work unfortunately never received high-level media attention. However, The Friends of Eddie Coyle remains a cult classic and an influential text amongst the noir fiction fraternity. Let’s keep spreading the word to ensure it stays that way.