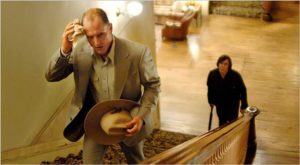 When hotels crop up in fiction, the story tends to crank up a notch. They serve as a base for characters in transition, often marking a major turning point in a protagonist’s trajectory.

With the comfort of home or familiarity of work out of the equation as a setting, hotels are natural havens for dark reflection, for brewing trouble.

They are places to set up an illicit rendezvous, to seek shelter in an emergency, to lay low and heal wounds, to hatch a plan, to break up a defining journey, to let loose on holiday, to discover a secret.

And they generate change. Characters rarely check out in the same state or mood as when they arrived…

No Country for Old Men
Let’s kick off with this Cormac McCarthy cracker that treats us to hotel scenes aplenty. There’s Llewelyn Moss holing up with a satchel containing $2.4m in stolen cash that hired hitman Anton Chigurh nearly snatches from his grasp in a Texas motel, not to mention Chigurh patching himself up from bullet wounds later on as the brutal chase spills south. But my abiding memory of this book is a recovering Chigurh taking out rival hitman Carson Wells, who is also on the trail of the loot, in Wells’ hotel room near the Mexican border. The two share some candid words in the darkened room as a poised Chigurh holds his shotgun at Wells, McCarthy’s pitch-perfect dialogue making it feel like a privilege to eavesdrop on this private discourse between two pro killers as death looms.
Just do it.
Yes, they always say that. But they don’t mean it, do they?

The Eye of the Beholder
A rogue PI follows Joanna Eris, a scheming serial killer, in this creepy cross-state thriller from Marc Behm. Fascinated by her actions, the PI, unbeknown to Joanna, cleans up after her murders as she vaults from city to city seducing rich men and killing them. During a stay in New York, an off-duty NYPD sergeant sees her fleeing the scene of a minor road accident and follows her back to her hotel room. Inside, he asks her questions and is met by a wall of evasiveness as the tension rises. Sensing she has something to hide, the cocky officer threatens to arrest her. For the first time we sense Joanna’s world falling apart, but she gathers herself and identifies the sleazy officer’s weakness. As he moves closer suggesting a sexual bribe, she swipes his pistol from his holster and shoots him dead. The snooping PI, having bugged the room, hears everything and is relieved that his voyeuristic adventures can continue.

The Shining
Stephen King in his pomp, creating one of the most haunting settings ever with the isolated Overlook Hotel in the Colorado Rockies. Winter caretaker Jack Torrance is starting to suffer from cabin fever in the vast and vacant hotel, his erratic state putting his wife and son in danger. Out of all the chilling scenes, the most telling in which our view of Jack changes forever is when he walks into the huge ballroom where the bar, as we well know by now, has no alcohol. But in a flash the shelves are lined with bottles of liquor and a bartender, Lloyd, is serving Jack drinks. Jack talks about his woes, Lloyd is a good listener. The presence of another character brings a new dynamic to the story, the fresh voice penetrating the mind of the reader. King makes it clear that Lloyd is a ghost and the drinks are imaginary, leaving us in fear of Jack’s sanity as Lloyd, speaking on behalf of the hotel’s malicious spirit it seems, advises Jack to ‘correct’ his family. There’s no turning back now.

The Motel Life
This 2006 debut novel from Willy Vlautin is a taut and compassionate tale of two destitute high-school-dropout brothers, Frank and Jerry Lee, set in Nevada. Forced to go on the run after Jerry Lee, drink driving one night, accidentally hits and kills a teenage cyclist, they head for Montana, sleeping in their car on some nights and in cheap motels on others. Vlautin skilfully explores the fears, frustrations and faded dreams of two low-income young men left behind by society and desperately short of luck. Riddled with guilt from the fatal accident, Jerry Lee shoots himself in the leg. While in hospital recuperating, he persuades Frank to break him out so they can continue their journey. In a motel in Elko, the brothers spend the night talking about their lives and fight to raise each other’s spirits in a heartrending scene, as Jerry Lee’s wounds worsen.

The Day of the Jackal
The Jackal, on a hired mission to assassinate Charles de Gaulle in 1960s Paris, has the French police on his tail and is starting to feel the pressure in this Frederick Forsyth classic. During a brief stay in a swish hotel in the south of France we see a different side to him as he seduces an older French woman. Although his survival instincts are part of the exercise (he later takes refuge in the woman’s chateau before he is forced to kill her when she discovers his rifle amongst his belongings), the scene stands out as it shows the Jackal acting on a motivation other than his ultra-professional drive to complete his mission. After the killing, the Jackal is no longer seen by the reader as unflappable.

Psycho
Couldn’t really miss this one out now, could I? Robert Bloch’s 1959 hit is one of the most absorbing mysteries ever written and served as a blueprint for how to weave deep psychological analysis into the flow of a thriller. My favourite scene in the Bates Motel is when Norman spies on Mary through the drilled hole in his office wall that runs into her bathroom after they’ve just shared an awkward dinner at the house following her late arrival with no open restaurant nearby. Drunk, confused, angry and excited, Norman gets dizzy at the sight of Mary undressing (she was swaying back and forth . . . and she was wavy, and he couldn’t stand it, he wanted to pound on the wall, he wanted to scream at her to stop) and, we’re led to believe at this stage, passes out in the office chair just before Mary enters the shower.

And another 6 that almost made it…
The Spy Who Loved Me, by Ian Fleming.
Pessimist, by Chris Rhatigan
Galveston, by Nic Pizzolatto
Jack’s Return Home, by Ted Lewis
1980, by David Peace
Those Who Walk Away, by Patricia Highsmith