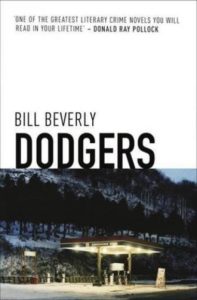 Some books impress you for their slick writing style or their gripping story. Or their well-drawn characters or the captivating world they carve into your imagination. Dodgers doesn’t impress you. It chisels itself into you. It overpowers you. It stays with you.

Bill Beverly’s debut novel, published in 2016, came out of nowhere. The author, Associate Professor of English at Trinity University in Washington DC, doesn’t appear to be your average breakthrough novelist. At the time of writing he has yet to release another work of fiction, so cashing in while his name is hot isn’t on his agenda. According to interviews, he took his time penning Dodgers. It was worth the wait.

Giving himself no deadline as he wrote, he went against what many new writers are encouraged to do by agents in the modern publishing climate: plan everything with a long-running series in mind. Culminating far too often in a stale, recurring main character doing the same things again and again. No, Dodgers is purely a standalone tale – as all the great works of literature are.

Relayed in meticulous and economical third-person prose, we follow the journey of 15-year-old LA ghetto soldier East in what can be described as both a crime caper road trip and a coming-of-age saga, a contemporary thriller in dialogue and place with the stylistic undertones of a classic fable.

East, the eldest son of a troubled single mother, works for a drug peddling crew, just like pretty much everyone else he knows on the streets of the bleak African-American suburban landscape he has been raised, where the prospect of a violent death is constant. Resourceful, watchful and earnest, he has a natural flair for survival – and he’s going to need it.

The crew’s boss, Fin, needs a Wisconsin-based witness killed before the guy can testify against his nephew in an upcoming trial. Fin tasks East, his trigger-happy 13-year-old half-brother Ty, and two other young crew members – the overweight Walter and the cocky Michael – with travelling across America to carry out the hit.

Hopping on a flight is deemed by Fin as too traceable, so he sets them up with a van kitted out with sleeping quarters and money for petrol and basic leaving expenses. The gang of four are forced to ditch their IDs, cards, phones and weapons so they can’t be identified if caught. They are all given LA Dodgers baseball jerseys to wear as cover, hence the title.

East has never been outside his home city before, and the country and terrain is alien to all of them. It’s not long before the quartet are at odds with each other as well as the job, and it turns out that Ty is carrying, having hidden a small pistol in his trousers. It’s okay, he’s only the most unstable of the four in that van.

Things don’t go to plan. The four of them have to improvise under pressure as things fall apart amidst a backdrop of the Midwest heartland rusting to a slow death. Characters are tested as the drama heightens. The van is vandalised and spray-painted with a racial slur. The mission flips. East and Michael have a vicious punch-up, the group splits in stages.

East, wise but with plenty still to learn, naïve yet world-weary, carries so much weight and humanity. He is one of the most original and heartrendingly authentic characters I’ve ever read.

The book is sharp and taught, while everything that happens is driven by a convincing rationale. These characters don’t have many choices to make, if any at all. The plot is simple and tense; there is no need for coincidences or twists. The observations Beverly draws are insightful and relevant, the visuals he paints in your mind are startlingly real.

Dodgers has drawn merited comparisons to HBO gem The Wire and picked up Golden Dagger Awards for both best crime novel and best debut. For me, nothing has matched it for many years. We had some great releases in the noughties and Dodgers is, so far, the best book of the 2010s (is that what they’re calling this decade?).

Check it out. If you already have, read it again.