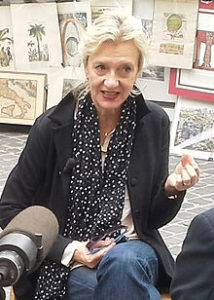 American author Elizabeth Strout is one of my favourite writers, and the imminent return of her most compelling character is a delightful prospect for any reader who enjoys smart, nuanced storytelling.

Olive, Again is being released next month, a follow-up to Strout’s Pulitzer Prize-winning 2008 novel Olive Kitteridge, and I can’t wait to get my copy.

The PR blurb reads: ‘Olive, Again follows the blunt, contradictory yet deeply loveable Olive Kitteridge as she grows older, navigating the second half of her life as she comes to terms with the changes – sometimes welcome, sometimes not – in her own existence and in those around her.

‘Olive adjusts to her new life with her second husband, challenges her estranged son and his family to accept him, experiences loss and loneliness, witnesses the triumphs and heartbreaks of her friends and neighbours in the small coastal town of Crosby, Maine – and, finally, opens herself to new lessons about life.’

Rarely do characters come as multi-layered as Olive. Strout used all her creative expertise and deep understanding of human relationships to craft a powerful and quirky persona. Olive, an ill-tempered junior high school maths teacher who gives her husband short shrift at pretty much every opportunity, is brusque, flawed and fascinating in roughly equal measure.

Intellectually sharp yet lacking emotional intelligence, she is conflicted by, among many other things, feelings of guilt over an affair she has with a colleague at the school and severe frustration at her inability to show love and openness, particularly when in the company of her son.

Not one for social niceties, Olive’s bluntness and absence of self-awareness leads her down several rough and difficult paths. The character reached iconic status when portrayed by the mesmeric Frances McDormand in HBO’s 2014 TV series based on the book, the actress nailing the emotional complexity of Olive’s nature with exquisite compassion and discord.

It’s hard to believe that Olive Kitteridge was only Strout’s third published novel, considering the masterful poise and elegance of the writing style. The richness and authenticity of the title character is woven into a collection interrelated stories within the book, allowing the multiple perspectives to add wider context (a technique Strout echoes in the sublime Anything is Possible, released in 2017).

Olive, Again looks set to reaffirm Strout’s status as an extraordinarily gifted novelist whose place as one of the very best storytellers is already assured. Her vision and fully-rounded grasp of human behaviour – and her ability to translate that to the page – has given us an array of convincing characters – and they don’t come any more convincing than Olive Kitteridge.

“It turns out – I just wasn’t done with Olive,” Strout says. “It was like she kept poking me in the ribs, so I finally said, ‘Okay, okay’…”