Patricia Highsmith was born on this day 100 years ago. The American’s powerful and seductive crime fiction remains as relevant today as it ever has been.

Her debut novel, the psychological thriller Strangers on a Train, was released in 1950 to high praise – especially for her gripping, existential writing style.

Just a year later the book was adapted for the screen by Alfred Hitchcock, bringing Highsmith’s work to a larger audience. The riveting tale of how architect Guy Haines and the psychopathic Charles Bruno ‘exchange murders’ (Bruno offers to kill Guy’s unfaithful wife in return for Guy knocking off Bruno’s father) explored themes of identity and morality that Highsmith would become renowned for in the years that followed.

Her second novel would be just as dramatic, yet more personal. Writing under the pseudonym ‘Claire Morgan’, 1952’s The Price of Salt was a ground-breaking romantic lesbian novel that featured an unusual (for the time) happy ending. It was republished 38 years later as Carol, the eponymous main character being portrayed by Cate Blanchett in the 2015 film adaptation.

Highsmith’s work was gaining many high-profile plaudits, such as Truman Capote and Graham Greene, who labelled her ‘the poet of apprehension’. In 1955 Highsmith created one of the most iconic literary characters of all time in The Talented Mr Ripley, where the down-at-heel Tom Ripley senses a chance to start a new life by murdering a rich heir to a shipping company, who’s living a luxurious life in Italy, and stealing his identity. After Ripley lays on the charm and develops the courage to carry out the deed, he goes on to become a skilled con artist and serial killer in the later Ripley novels – Ripley Under Ground (1970), Ripley’s Game (1974), The Boy Who Followed Ripley (1980) and Ripley Under Water (1991).

But despite the literary success, life wasn’t easy. Writing became a form of escapism and clarity for Highsmith, who suffered a troubled existence away from the typewriter. She endured several cycles of severe depression, developing a cynical, lonely and hostile persona – worsened by her dependency to alcohol. The intimate sexual relationships she formed, mostly with women, didn’t last long.

In 1982 she moved from New York, where she’d lived since she was six, to Switzerland, where she lived a remote existence until she died in February 1995, aged 74.

She left behind a body of work – 22 novels and nine short story collections – that few authors could match in quality or meaning. Highsmith was brave enough to explore her own instincts, ambitions and fears within her fiction, which in turn made it easy for readers to identify with her flawed characters and their tales of forbidden love, complex personal liaisons or starting over, all laced with fascinating psychological intrigue.

While reading through the Amazon reviews of my crime thriller Chasing the Game recently, I was struck by one comment in particular: “It would be interesting if the story could be dramatized for the 50th anniversary of the theft in 2016.”

The novel’s main character, Dale Blake, who plots the theft of the Jules Rimet Trophy in 1960s London, would certainly make a powerful and captivating on-screen presence, and it got me thinking about those actors who have really pulled off a performance that matched the momentous work of the author who created their character.

There have, of course, been many examples of on-screen portrayals of literary figures not working out (John Hannah’s version of Rebus just didn’t hit the mark) but let’s focus on the positives and run through some shining examples of compelling character acting that either lived up to – or even surpassed – our high expectations, having sat down to watch with the literary versions of these characters foremost in our minds.

The characters listed below are simply some choices I’ve made from my experiences of watching TV or film adaptations of my favourite books (and ones that I’ve managed to recall on the spare evening I’m writing this). I’ve thrown in a few unusual ones to catch the eye, but if you feel I’ve made a glaring omission or a ludicrous pick, tell me about it on Twitter – @PaulJGadsby – I’d love to chat about it with you. 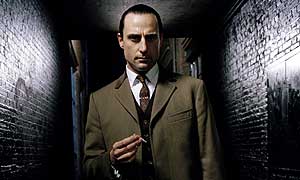 Mark Strong as Harry Starks (The Long Firm)
Jake Arnott’s debut novel was a groundbreaking piece of fiction that rejuvenated the gritty British gangster genre, and charismatic nightclub owner and racketeer Harry Starks stole the show. When it came to the BBC’s four-part dramatization of the book, Mark Strong nailed the role to such a degree that it’s impossible to read the book now without imagining Strong’s face in every description of Starks and every line of his dialogue. Strong’s performance was magnetic, forceful, tender and utterly convincing, piercing into Stark’s complex and fascinating soul and capturing every single aspect of it.

Richard Attenborough as Pinkie Brown (Brighton Rock)
The 1947 film version of Graham Greene’s haunting classic is widely regarded as one of the finest ever cinematic expressions of British noir, and this was in no small part down to the skill Richard Attenborough applied to playing Pinkie, the story’s lead villain. A sadistic teenage gangster, a thrilling and terrifying embodiment of pure, irredeemable evil, Pinkie is one hell of a character to play and his relationship with young waitress Rose takes him on an emotional rollercoaster in the second half of the movie and Attenborough expertly maintains his immense control over the part throughout – resolute, chillingly sociopathic, and downright creepy wherever appropriate.

Gert Frobe as Auric Goldfinger
Okay, at some point I was going to squeeze a Bond villain into a list of crime fiction characters. Goldfinger was not only one of my favourite books from Ian Fleming’s series, it was also one of the best films from the franchise. German actor Gert Frobe captured the subtle gestures and nuances from Fleming’s alluring prose quite beautifully, and he just . . . looked like the guy you imagined in the book. Frobe was a strange casting choice as well – in that he couldn’t speak English – but that was nothing a bit of voice dubbing couldn’t fix. Frobe’s appearance and mannerisms matched the essence of the character, and for me he is the finest representation of a literary Bond villain we have seen, with Mads Mikkelsen’s portrayal of Le Chiffre in Casino Royale coming a close second.

Basil Rathbone as Sherlock Holmes
Now we’re talking classic. Rathbone appeared as the cunning sleuth in 14 films between 1939-1946 and for me no one has quite matched him since. When I read the books, I imagine Rathbone’s face, Rathbone’s profile, Rathbone’s turn of phrase, Rathbone’s charm. The fact that Nigel Bruce’s stupendous depiction of Watson during those films has since blurred into the background perhaps says it all about the impact Rathbone brought to the lead role. With his deerstalker silhouette having reached iconic status, Rathbone will always be, for me, the quintessential Holmes.

Matt Damon as Tom Ripley (The Talented Mr Ripley)
A bit left-field this one but still worthy of extremely high praise. Patricia Highsmith was a glorious novelist and this is my favourite book of hers (just beating Strangers on a Train). There are so many angles to the character of Ripley, her darkly twisted young man who’s in Italy trying to escape his true self, that Damon really has his work cut out in order to slip into Ripley’s skin. Morally vacant, haunted, desperate, sad, lonely, evil, lost, gifted, tender – Damon masters them all in a powerhouse performance that’s as fantastically elegant as it is deeply unsettling. You just can’t look away from him on the screen. To me this is still Damon’s signature role despite the subsequent success of the Bourne franchise.

Ashley Judd as Joanna Eris (The Eye of the Beholder)
Marc Behm’s 1980 novel paints a vivid picture of this psychologically scarred character who’s no ordinary femme-fatale. The composed and striking Joanna employs her raw survival skills to hop from city to city, changing wigs and aliases as she preys on rich men before marrying and then killing them. A private investigator (played by Ewan McGregor in the film), absorbed by her life and fascinated by her backstory, follows her as she cuts a deadly swath from New York to San Francisco to Alaska with many scintillating stops in between. The killing is Joanna’s coping mechanism to get through life, but when she genuinely falls in love with a sophisticated but vulnerable wine merchant (who’s blind) and falls pregnant, tragedy strikes. Judd crawls into the heart and soul of Joanna, expressing her wild personality changes, her dark cunning and her crushing sense of abandonment and loss with such sincerity that we never judge her. We, like the PI who follows her, just want to watch and understand her.

Paddy Considine as Peter Hunter (Nineteen Eighty)
In this second instalment of the three-part Channel 4 serial depicting David Peace’s Red Riding Quartet, Peter Hunter is the lead detective in a disturbing fact-meets-fiction investigation to catch the Yorkshire Ripper. A Lancastrian called in to lead the paranoid and dejected Yorkshire CID team who’ve failed so far to catch their man, Hunter is up against it to get the officers who hate him on his side and the infamous serial killer behind bars. As the pressure mounts in a community gripped by fear and a police force riddled with corruption, Considine brings just the right amount of steel, anxiety and dismay to the role that Peace so poetically conveys in the book.

Ryan Gosling as Driver (Drive)
The lead role in this tale (James Sallis only ever referred to him as ‘Driver’ in his novel while in the film he was unnamed) is the archetypal example of the neo-noir hard-man male, a walking embodiment of the description ‘enigmatic’. The prose in the book is so startlingly sparse that we are captivated by this mysterious lead character and are desperate to know more about him. A Hollywood stuntman by day and underworld getaway driver by night, Driver is a weighty creation and Gosling does a mighty fine job of representing him faithfully on screen – his performance is poised, restrained, slick and brutal.

Anthony Hopkins as Hannibal Lecter (The Silence of the Lambs)
I guess the Academy Award says it all. Hopkins’ portrayal of Thomas Harris’ cannibalistic serial killer will never be forgotten. Clearly one of the most strikingly visual cinematic performances of all time, my favourite scene is how Hopkins appeared the first time we meet Hannibal as Clarice Starling approaches his cell. He’s not gripping the bars or slouched on his bed as he awaits his visitor; he’s standing bolt upright in the middle of the room, arms down by his sides, staring right at her. Chilling.

Humphrey Bogart as Philip Marlowe (The Big Sleep)
Another choice that perhaps picks itself. I think the strongest element to the 1946 film version is how the script is heavy with graceful dialogue rather than loaded with action – the characters are free to talk, in keeping with Raymond Chandler’s book. And when it comes to verbal tone and visual style, the cool Bogart earns the plaudits. His wry, humorous delivery, set amongst the beautiful black and white cinematography, just oozes noir, while his lusty on-screen chemistry with Lauren Bacall adds a dynamic, hearty charge to the narrative.