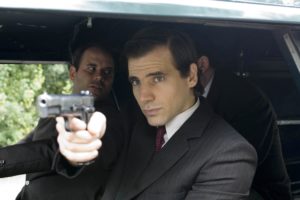 I recently wrote an article for the Criminal Element website about my favourite fictional chase sequences that helped inspire my new novel Back Door to Hell.

The piece, titled ‘The best cat-and-mouse chase thrillers in crime fiction’, explores 10 examples of captivating stories – ranging from the classic to the modern – that feature a significant chase as part of the plot, from police pursuing criminals to villains hunting after each other.

Take a look and let me know at @PaulJGadsby if you think I’ve missed any crackers out.

As you can see from my influences page, many of my favourite books are standalone novels, but there are also some works that form part of a series.

Many a literary agent/editor/publisher will tell you that, particularly with crime fiction, long-running serials sell much better than standalones. Beginner writers are continually told by industry insiders that, if they want to break into the market, they stand a much better chance if they pen a manuscript ensuring the main character will return (preferably on many occasions) rather than fashion a one-off tale.

But why is this? Why are the series more appealing to readers and therefore more successful in the marketplace? Here are my thoughts, analysing the pros and cons of both standalones and series.

Standalones – the pros
By their very nature, standalones generally depict a very passionate story. The author has composed the tale based on a burning theme they wanted to pursue, a poignant story they wanted to unravel and a certain message they wanted to transmit to the reader. And they have been free to express that story in any way they see fit, tying up any loose ends (to an ultimate conclusion) if they wish, exploring any theme or location to the very limit, knowing they or their characters will never go down this road again. The shackles aren’t as much off; they were never on in the first place.

Authors can also lead their main protagonist down any dark alley they want to, even if the outcome proves fatal. The reader is on edge because they know that the character they’ve related to and connected with faces any degree of peril. The writer is doing it their way; they are pulling all the strings because they are under no pressure to sustain any part of the story or a character for a future instalment.

The authors are writing with their hearts, holding nothing back. Fire is in the belly as well as the fingertips as they unleash their saga. Whenever a media outlet releases a list of the greatest (or most popular) novels of all time, standalones are always there standing proud. For Whom the Bell Tolls, Catch 22, David Copperfield, To Kill a Mockingbird, The Postman Always Rings Twice, The Day of the Jackal, The Killer Inside Me, The Great Gatsby, American Psycho, Scoop, Disgrace, Libra, The Road, No Beast so Fierce and many, many more. Works that carry a central emotive core and bare the author’s soul; unbridled creations and unique artefacts.

Standalones – the cons
Imagine if Ian Fleming, having written his heart out on his debut novel Casino Royale, had left James Bond at that point and moved on to another project, 007 confined to history in 1953. Standalone books provide us with great high-stakes tales but there’s the downside that stopping at one story prevents further development of a fascinating character, denying us the prospect of enjoying this protagonist taking on more challenges and allowing us to bond with them further. There’s no doubt that the huge cultural impact certain recurring characters have had on the world (Bond, Sherlock Holmes, Philip Marlowe et al) has done wonders for crime fiction and duly rewarded their authors with much deserved adulation.

Another point to consider here is that sometimes a standalone can be too long (Don DeLillo’s Underworld breached into this territory, as did Against the Day by Thomas Pynchon), possibly to the extent that you feel the author probably considered splitting it into a mini-series somewhere along the way but stuck with it anyway. And sometimes the total freedom an author enjoys with a standalone can lead to self-indulgence and a story/theme that winds out of control, but in a trade that depends on huge reserves of creativity and bravery, that’s often a small price to pay.

Series – the pros
Within the context of a series, particularly a long-running one, absorbing characters can be further enriched so they become legends, both literary and cinematic. There is plenty of room in standalones to develop and focus on characterisation (as there is setting and plot) of course, but with a series we just get to spend more time with our heroes, or at least people we’re fascinated by and have formed a connection with.

Another good thing about serials, especially in crime fiction, is that the cream of writing talent often rises to the top; series formats have allowed some magnificent writers to forge thoroughly deserved successful careers. Not many publishers dish out multi-book deals to poor writers. The likes of Patricia Highsmith (Thomas Ripley), Ian Rankin (Rebus), Mark Billingham (Thorne), Ken Bruen (Jack Taylor), James Sallis (Lew Griffin & The Driver), Adrian McKinty (Sean Duffy & Michael Forsythe), James Lee Burke (Dave Robicheaux), James Crumley (Milo Milodragovitch & C.W. Sughrue) and Ray Banks (Callum Innes) have all developed as writers over the course of sticking with their returning characters, the pressures of meeting their regular instalments perhaps forcing them to harness their craft in a quicker – and ultimately more confident way – than they otherwise would have done.

Serials also offer authors the opportunity to write a smartly conceived mini-series based mainly on theme rather than one principal character. With these each book is often significantly different in terms of timeframe or minor characters becoming major ones in the next book and vice versa. David Peace’s Red Riding quartet would fall into this category, a wonderful series that wouldn’t have been anywhere near as powerful as a standalone, nor a long-running series. James Ellroy’s LA quartet and Underworld trilogy also spring to mind here, as do Scott Phillips’s The Ice Harvest and The Walkaway, the narratives of those two connected works separated by 10 years.

Series novels also tend to get talked about more in social circles (so I’ve noticed anyway), allowing more opportunities for readers to share their experiences. An extensive, consistent body of work seems to bring people together more than standalones appear able to, and anything that gets people talking about reading, whether it’s at home, work, the beach or on social media, is a positive thing.

Series – the cons
The downside of an author under pressure to publish an annual instalment of a long-running series is of course the danger that they end up just churning them out. Just as their main character may have helped that author achieve fame, the process can also push them over the edge, their creative forces crashing and burning. Pumping out a novel a year to meet marketplace pressure can be a trap to penning prose unworthy of the writer and their initial ambitions, and that’s a real shame.

There’s also the danger of too many new writers feeling they have to launch their career with a main character that has ‘plenty of legs’, which all too often leads to the creation of a cliché-ridden detective we’ve all read enough of. You know the type; divorced, has a troubled relationship with his teenage son/daughter who’s growing up too fast, puts his work before his health and lifestyle, he’s the only one who despises corporate suits and bureaucracy, he unwinds in the winter evenings by listening to music anyone under 35 would scoff at, with a stiff drink in his hand. And the evil activities of each particular rival he encounters eventually results in the duo facing off in a duel, where the arrogance of the criminal leads to victory for the humble hero.

The readers lose out big time here. Not only can the returning character lose their appeal, but the plot can also lose its punch. Let’s face it, as the stakes rise in the final third we always know the main character will get out of this latest scrape relatively unscathed because they’ll be back for another adventure next year.

An example of an author who made his name with a solid series but broke free of the format to express himself in standalones is Dennis Lehane. After five instalments of blue collar detective duo Patrick Kenzie and Angela Gennaro, he pulled himself away to write Mystic River (later adapted into a Hollywood blockbuster) and then Shutter Island (ditto), two superb one-off thrillers that were both critically acclaimed and commercially successful.

Series are obviously easier to market. The industry loves them, often to the extent that a new release is promoted as a series right from the off. The first time I saw publicity for Malcolm Mackay’s debut novel The Necessary Death of Lewis Winter, it was labelled as the first instalment of ‘the Glasgow trilogy’. Almost as if his agent pitched the debut manuscript to a publisher who said “Forget it – unless your guy’s got two more up his sleeve, then I can call it a trilogy and I’ll have something to sell”.

David Peace’s ‘Tokyo trilogy’ was marketed as such on the release of the first instalment in 2007. After releasing the second in 2009, Peace drifted away from the concept and wrote Red or Dead, his standalone football novel about the late Bill Shankly. At the time of writing (September 2014) there’s still no sign of the final part of the Tokyo trilogy. Perhaps a sign that the desire for a series is more pressing for the marketing people than it is for the authors.